History of the Unitarian Universalist Congregation in Andover 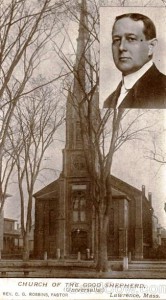 The home of the Universalist Society of Lawrence and, later, the Church of the Good Shepherd, Unitarian Universalist. The inset is Rev. C. Guy Robbins, the longest-serving minister of the congregation.

Shortly before the City of Lawrence incorporated, the first Universalist sermon was delivered there in January 1847. The Universalist Society was organized later that same year by working class persons; many of the men who built the first building for the congregation were mill workers in the city. Some of them had worked on the city’s Great Stone Dam. By 1853, they had completed a church building on Haverhill Street. Today this building is the home of the Evangelical Primitive Methodist Church. (Note: If you’re looking for the building, which still stands, know that the 1955 hurricane blew down the steeple of the building, and it was not replaced.) 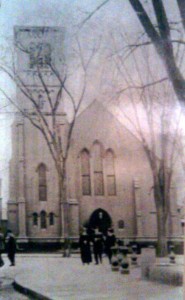 The Parish of the First Unitarian Society in Lawrence.

That same year, 1847, the Parish of the First Unitarian Society was also organized. This congregation was called together by Charles Storrow, a prominent civil engineer who had designed the Great Stone Dam. (Storrow Drive in Boston is named after his grandson, James J. Storrow.) Early members of this Unitarian congregation were mostly “white collar” workers, including physicians, lawyers, engineers, and industrialists such as Storrow. In fact the City of Lawrence was named after Abbot Lawrence, who was a Unitarian lay person.  This congregation had two buildings, both at the corner of Haverhill Street and Jackson Street.  (Note: If you’re looking for these buildings, know that the main building was torn down in 1917 due to structural issues. From 1917 until 1956, they worshipped in the smaller brick building; that building still stands.)

A century later, both congregations found that they had dwindling memberships. Overcoming their class and cultural differences , the two congregations decided to merge in 1956 and become the Church of the Good Shepherd, Unitarian Universalist. Interestingly, this Lawrence merger of Universalists and Unitarians pre-dated the national merger of these two denominations by five years. 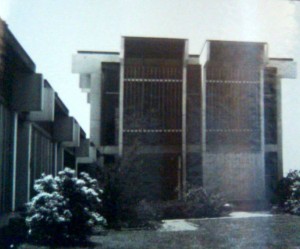 The former home of the Unitarian Universalist Church of Andover on Lowell Street, currently home of the North Boston Korean Methodst Church.

The Church of the Good Shepherd commissioned a study to see what they might do in order to increase membership; the study suggested that the congregation should move to a nearby suburb. Subsequently, the congregation moved to Andover in 1964, changing its name to the Unitarian Universalist Church of Andover. It had a brand new building at 244 Lowell Street, a contemporary structure with a striking sanctuary; unfortunately, it proved to have design flaws that led to issues such as leaking roofs, prohibitive heating costs and maintenance needs. In 1980, this building was sold to the North Boston Korean Methodist Church.

6 Locke Street in Andover. This historic shingle-style building was built in 1892 by the November Club, which was New England’s first women’s clubhouse. The congregation purchased this building in 1985, two years later doing significant renovations including the addition of Johnson Hall on the lower level.

In 1994, the congregation changed its name from the “UU Church of Andover” to the “UU Congregation in Andover”, in recognition of their religious and demographic diversity.

Interestingly, there was a Universalist congregation in Andover in the 1860s (on the corner of Punchard Street and Main Street), but this congregation did not survive to become part of the present-day UUCiA merged body.

Though the UUCiA is no longer physically located in Lawrence, the congregation continues to connect with its Lawrence roots by participating in such organizations as Habitat for Humanity, Bread & Roses, Lawrence Community Works, and more. 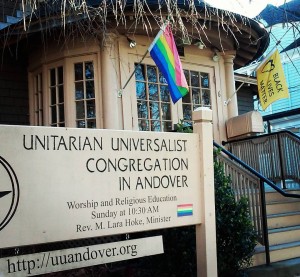 The UUCiA in 2015, displaying both a rainbow flag and a Black Lives Matter flag.

The UUCiA became a “Welcoming Congregation” in 1994, making it among the earliest of the congregations of the Unitarian Universalist Association (UUA) to intentionally welcome and affirm LGBTQ persons. In 2015, the congregation became one of the early members of the UUA to display a Black Lives Matter flag.

Succession of Ministers at UUCiA

Here are the past and present ministers of the merged congregation:

As noted above, 1956 marks the year that two local congregations merged. Those two congregations were the “Universalist Society of Lawrence”, and the “Parish of the First Unitarian Society in Lawrence”. Here are the ministers who served those congregations:

Parish of the First Unitarian Society in Lawrence