The Rev. Kali Fyre discovered Unitarian Universalism through the CUUPs group at her home congregation, which prompted her to co-found the Meadville Pagans and Allies student group while in seminary.  Kali graduated from Meadville Lombard Theological School in Chicago, where she was a Roy B. Wintersteen scholar.

You can read more about Kali at the “meet our minister” page on this website. 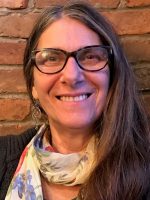 Thea Shapiro, the UUCiA’s Consulting Director of Religious Education, also serves as DRE of the First Church Unitarian.  Previously, Thea served as our DRE  for 17 years. During her tenure here, she led the Our Whole Lives programs for both elementary age children and junior high school youth, as well as numerous Coming of Age classes and celebrations, naming ceremonies, and intergenerational worship services.

In addition to her varied DRE roles, Thea has served for many summers as head counselor and chaplain at youth camps run by the Ferry Beach Conference Center in Saco, Maine.

For more than a decade — also at Ferry Beach — she has co-led an art and yoga workshop for adults during Religious Education Week.

During the school year, Thea teaches enrichment art and yoga classes at various schools and at the Boys and Girls Club in Lawrence, Massachusetts.

Thea believes that children and youth are extraordinarily spiritual people who are able to express their joys, fears, sorrows and everything in between from a deep and honest place. Adults can learn a lot from children and youth about being in the moment.

Thea is a 200-hour certified yoga teacher and is also certified in children and teen yoga.

She attended and was ordained by CHIME (Chaplaincy Institute of Maine) in 2012 and attended the Philadelphia College of Art.

She is an artist, mother of two adult children, and a wife and partner to David. 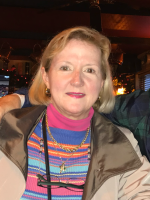 Barbara Kilduff has had a long, internationally acclaimed career as a leading coloratura soprano. Her career began as a National winner of the Metropolitan Opera Council auditions, going from there to win first prize in the Munich International Competition and the silver medal in the Tchaikovsky Competition in Moscow.  Barbara has performed in Munich, Vienna and Hamburg State Operas, Basel, the Metropolitan Opera, La Scala, Vancouver, Athens, San Diego and Cologne, Washington Opera, Zurich, Geneva, Bonn, Graz, Madrid, Mannheim.

In the New England area she has performed as Lucia (Lucia di Lammermoor) with Granite State Opera, Norina (Don Pasquale) with the Newton Symphony Orchestra, Morgana (Alcina), Queen of the Night (The Magic Flute) and Konstanza (Abduction from the Seraglio) with Emmanuel Music.

In parallel with her busy singing career Barbara has taught voice at Phillips Academy for the past seventeen years. Barbara lives locally in Andover with husband, Dermot and their two daughters, Eileen and Caroline.

Further  information can be found on Barbara’s website at barbarakilduff.com